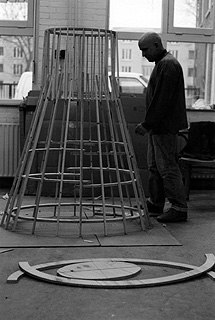 Where does the interest in making sculpture begin? Connections emerge over time, both known and unrecognised. I remember my mother's actions at the potter's wheel: below, the turning mechanism of the kick wheel in variable rhythm, while above a spinning with hands held still around the clay forming a vessel. It wasn't until my late forties that I discovered clay as a medium for myself. My uncles, whom I only met once or twice, were, I knew, car workers in Wisconsin. It was decades after I had been casting metal that I learned they worked their lives in the engine foundry.

Studying philosophy during the political upheavals of the late 60's at San Francisco State brought together theory and its manifestation in political action. But my continuing pursuit of a more personal search for meaningful activity led to phenomenology and the study of embodied understanding and experience, and the first steps in making things with a new awareness. The world also speaks through objects (sculptures being a particular kind of object) and the capacity of the conversations of objects to reveal something beyond philosophy and social action was and continues to be something of a radical possibility for me.

I moved, permanently as it turned out, to England to study sculpture, and worked through the formative intersection of American minimalism and the more lyrical sculptural concerns in Britain. I see the activity of sculpture as fundamentally speculative. This connects with my involvement with teaching at Central Saint Martins College of Art and Design where I was a Senior Lecturer and headed the Sculpture Area on the B.A. Fine Art Course (1997-2007), and subsequently became a Senior Research Fellow there. The academic framework exemplifies art's lively discourses and practices in a social context. It complements my own studio activity, which takes place in a more reflective, rural environment.

A working practice is conditioned and often coalesces around a 'body of work', commission, or project, and the website follows a chronology which breaks down conveniently to include fellowships and residencies. Of course, it is also possible to think of alternative taxonomies. For example, I can see my work in categories of individuals, couples, families (and hybrids thereof). This makes sense to me because there is a strong figural impulse in the work, though counterbalanced by an interest in geometries that has found development through digital modelling.

For me, the practice of sculpture is fuelled by paradoxical conditions. One is the sense in which sculpture is an attempt to embody conditions of the animate, gesture for example, into a state which is fundamentally still and mute. Another is the fascination with the process of working with materials which ultimately find completion in an object, the drive to keep things fluid while knowing that there must be an end, a death of action which is the object. And then there is the paradox of presenting you with digital/virtual images (on this website) of objects whose main claim is to simply exist materially.